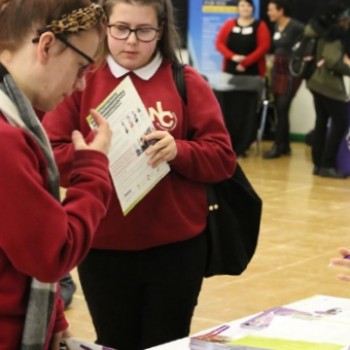 On Wednesday 20th March, NLC hosted their first whole school careers fair that involved every year group in school attending to speak to a range of different providers about their future career options.

The event was organised by Angela Shufflebottom, Sarah Timberley and Gerald Surry and they worked hard to ensure the studentswere able to discuss their future career options with a wide range of providers including several Universities, Manchester Met, LeedsUni, BIMM, Falmouth, Huddersfield and Leeds Met. We also hosted a range of apprenticeship routes, both local and national, local businesses, the armed forces and an array of local colleges, including our own CMSS! The students responded with enthusiasm throughout the day and were not shy in asking key questions about application routes and future career prospects.

A massive thank you to Angela and Sarah for organising such an impressive event, we are already looking forward to next year!

< Back to all news stories